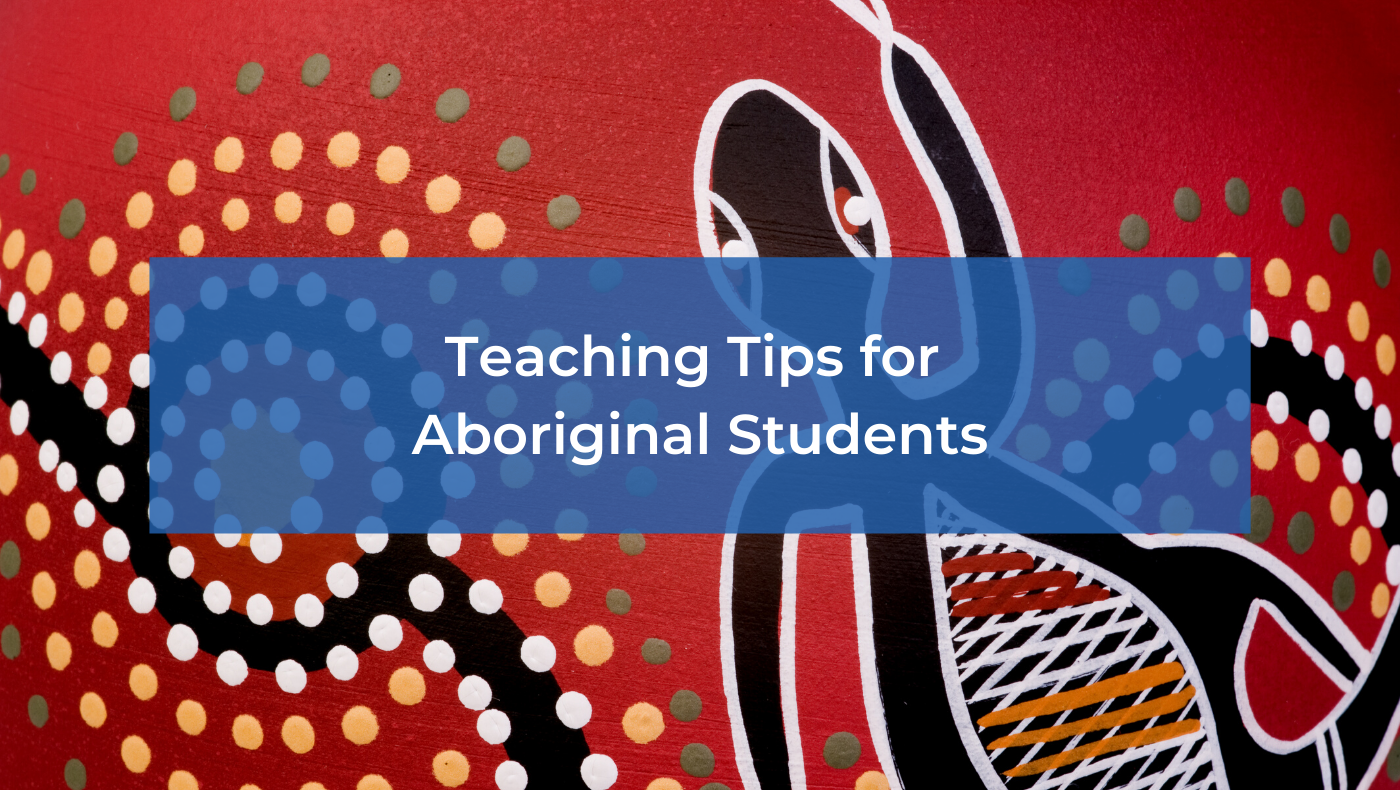 The following suggestions may help get better teaching and learning results with Aboriginal students, particularly those in more remote areas.

1. Avoid Working with the Individual in a Group Situation

Many Aboriginal students do not like to be singled out in a classroom or group situation.  It is sometimes better to get students to answer questions collectively than causing embarrassment to one student by focussing on them in front of other students.  Try for collective responses and deal with individuals in private by themselves.

Aboriginal society does not single people out in a group situation. Students may recoil at any attempt to get them to give an answer, to praise or reprimand them too publicly, or to stand in front of their peers. In other words, many tend to recoil if made to feel conspicuous in any way.

Where there are large numbers of Aboriginal students in a class they tend to call out answers together and chatter about them. They do not regard individuality as highly as they do the interests of the group and tend to participate together.

The question and answer format of English is not common in Aboriginal society.

Try not to ask a question in a challenging way – especially one that requires an answer ‘no’.  Many Aboriginal people do not like to say ‘no’ as they feel they are letting you down.  Often it is better to ask a question or give an instruction obliquely.

Examples:  What would you like to eat for lunch?

Will you help clean the bus?

Alternative:   Perhaps you may like to help clean the bus.

Some Aboriginal students feel uncomfortable with direct eye contact with the person to whom they are speaking.  This can be avoided by focussing on the problem or the issue instead of the person (and their face/eyes).  Try to walk with a student when talking to them, or sit next to them and look ahead.   That way you are not looking at them.  There is more chance of getting young children to talk in this situation, especially if you want them to tell you what they know.

Some Aboriginal people still consider it disrespectful to maintain eye contact with the person with whom you are speaking.

I found it easier to get Aboriginal children talking when we went for our afternoon walk in the bush.  They were comfortable in the bush situation.  They would tell me about what you can or can’t eat, which animal tracks they saw. When they weren’t being directly challenged with eye to eye questions, they were generally relaxed.  On those walks they taught me their language (and laughed at my pronunciation) and they learned more English.

Many Aboriginal people do not reply instantly when asked a question.  It is not unusual for long periods of silence before a response is given.  Aboriginal people often think about the question before answering.

Silence does not always mean someone is shy or does not know the answer.  Try not to interrupt and thus give students time to think and then answer.

Aboriginal students have an immense ability to learn different languages.  Around Broome in Western Australia, from the early 1900’s to the 1960’s and 1970’s, many Aboriginal people spoke fluent English, Japanese, Malay, Tagalog, Chinese, together with up to 6 or 7 indigenous languages.

The ‘h’ before a vowel at the beginning of a word is often not pronounced by Aboriginal students when speaking.  The same occurs in the French language where the ‘h’ is not pronounced. The French often do not stress the ‘h’ in English words such as ‘hotel’, ‘horse’ or ‘hot’.

Teaching students how to pronounce some difficult sounds.

The sound ‘th’ is not in any Aboriginal languages to my knowledge.

That explains why the sound ‘th’ is difficult to pronounce for many Aboriginal students.

This can be easily taught by asking the child to put their tongue between their teeth – like a lizard.  At first when they try to say the sound, they often remove the tongue from its position between the teeth – but after a few goes, and being asked not to pull the tongue back, they can have perfect pronunciation.  Remember there are two way of pronouncing ‘th’:  soft sound ‘th’ as in ‘thick’ and the hard sound ‘th’ as in ‘that’. This method is an easy way to teach the sound – and applies to both variations of the sound.

I have never found any child embarrassed when I have taught this sound.  They usually have a big smile when they realise they can correctly say the sound ‘th’.

The sound ‘wh’ can also cause problems with some students. An exercise that can help correct pronunciation is to say the words ‘when’ and ‘went’.  ‘Went’ is straight forward, but ‘when’ is a plosive sound like ‘t’, ‘p’ and ‘f’.  If the student holds their hand open in front of the mouth, they can feel the explosive puff of air onto the hand. With the pronunciation of ‘went’, there is no sensation of air hitting the open palm of the hand.

When teaching syllables in spelling, the same syllable rules apply to Aboriginal languages.

In the Martu language spoken in the western desert (e.g., Jigalong), echidna is called ‘mingwa’   ming / wa  – both syllables have a vowel sound.

If you have any tips to add, please contact Mark Nevill